On most cards there are several fuses which will blow and prevent an electrical fire in the event of a fault. This is not the case with the Triumph Dolomite range as they only have two fuses. All triumphs and most other English cars share the same colour coded wiring systems of which the more important of these is explained below. 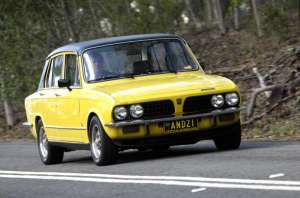 Arguably the best model to come from British Leyland is the Triumph Dolomite Sprint. The Sprint was a true sports saloon and offered incredible performance that is impressive even by today's standards. A unique 16 valve SOHC head was applied to this model, which was favourably comapred with BMW2002tii and similar sporting saloons of the period.

Australian market cars were all Mimosa (yellow), but dealers like Hodgson in Sydney,specially imported a few white ones to offer something a lttle special to enthusiasts. Anumber of the cars were raced here , however they had few major sucesses.